1. What is the difference between bike routes and bike trails?

ROUTE is nothing more than a communication route specifically designed for cycling, which may include:
– bicycle paths,
– bicycle lanes (including counterflow lanes),
– pedestrian-bicycle paths,
– public roads with calm traffic.
Routes must meet basic standards (asphalt surface, slopes not exceeding 6% over a length of more than 250 m, ensuring a design speed of 30 km/h, minimum width 2.5 m, marked with R-4 signs). Routes marked in such a way favour the development of mass cycling tourism and fulfil transport functions, by linking the most important urban centres in the region.
In Małopolska, there are currently 1 national route (Vistula Bicycle Route) and 3 international routes (EuroVelo4 named locally VeloMetropolis, EuroVelo11 named locally VeloNatura and “Historical, cultural and natural cycling route around the Tatras”) under construction. Other main routes under construction have voivodeship scope (VeloDunajec, VeloRaba, VeloRudawa).

TRAIL is usually a loop or a tourist line along the existing infrastructure (from asphalt public roads with high traffic to muddy dirt paths) marked out in the area with painted marks or signs (R-1). The elevations can be significant, especially on mountain trails, sometimes preventing smooth running due to the ground or slopes. They are suitable for specialized cycling and usually don't have transport functions. 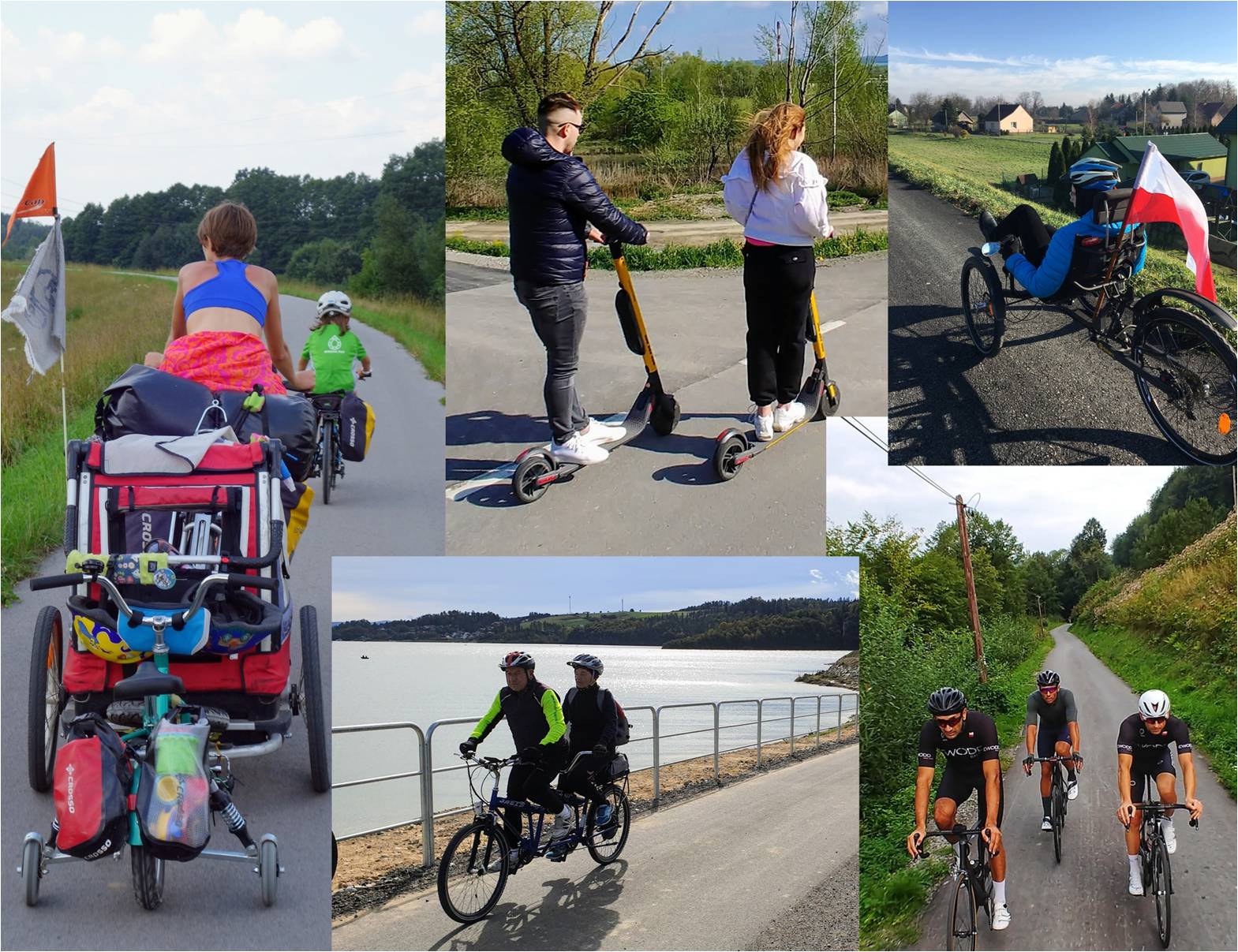 2. How difficult are the routes in the Małopolska region?
The main VeloMałopolska routes are easy ones, tracked along river valleys and disused railway lines. They allow riding on all types of bikes, including with panniers and trailers. They are intended for mass tourism.
On the other hand, trails and bicycle trips may vary in scale of difficulty, it’s always advisable to read the description before riding (check out the surface, separation from traffic and function).

3. How are the routes and trails in the Małopolska region marked?
In accordance with Polish law, the routes of VeloMałopolska network are marked with R-4 signs and plates containing the name of the route.
Example of marking of the VeloDunajec route in Frydman. 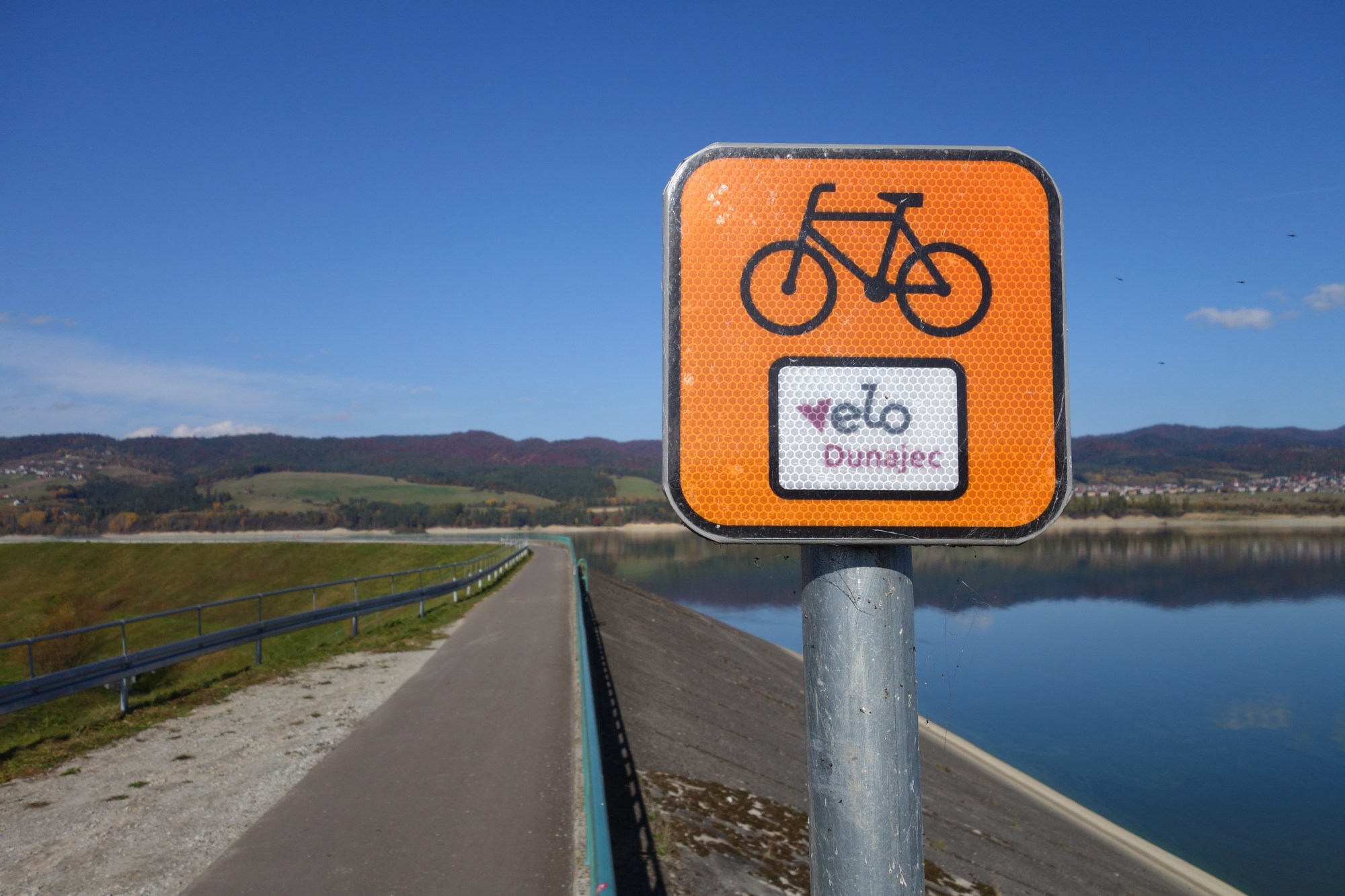 Routes are usually marked with R-1 signs, although there are also exceptions and local marking of the route with the use of pictograms. 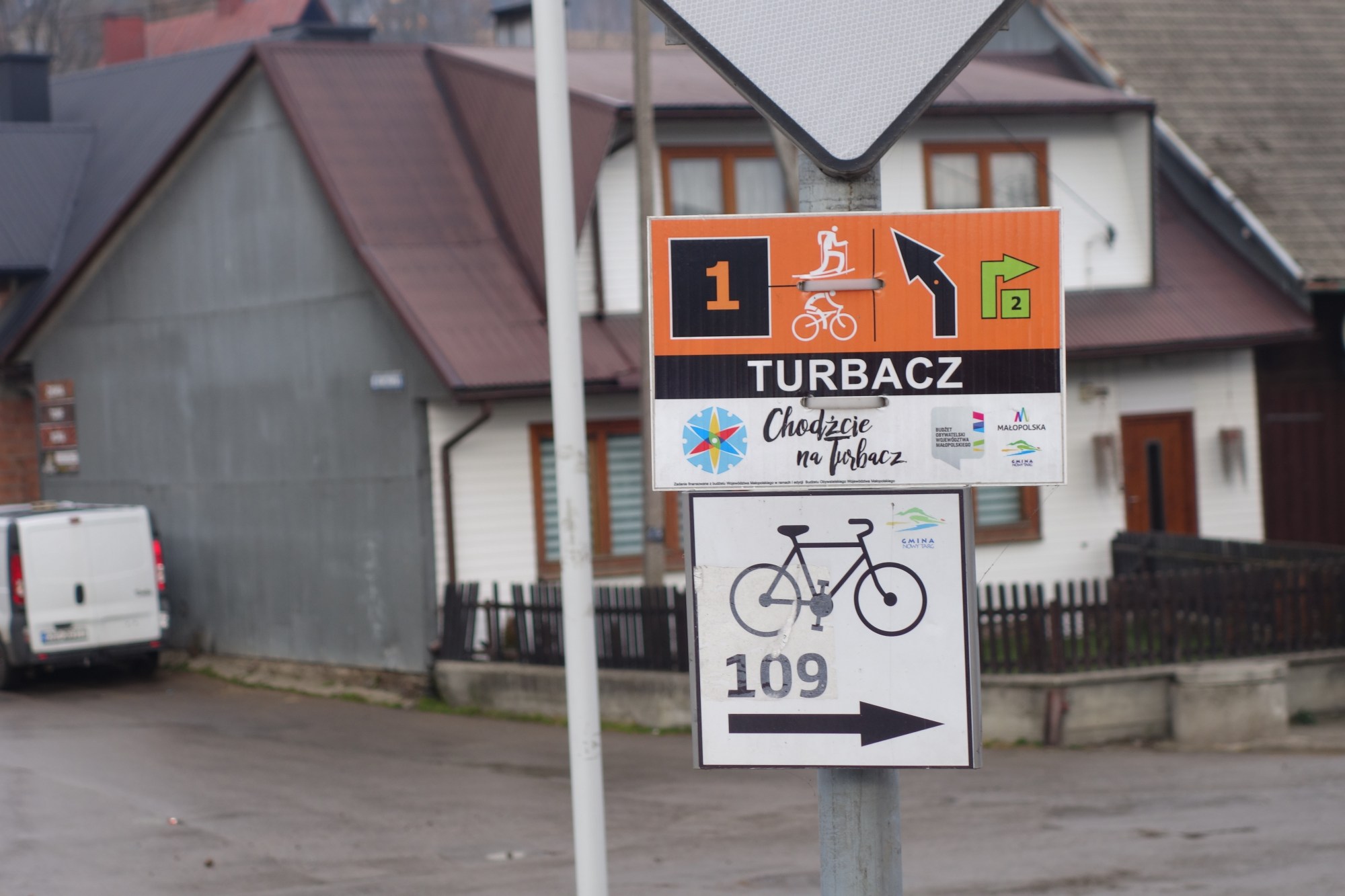 4. How do I get to routes and trails?
Main routes are built in the form of a line intended for long-distance cycling tourism, usually running alongside transport integration hubs (i.e. railway, bus stations, airports). For example, the ride on Vistula Bicycle Route can begin from Oświęcim or from Jawiszowice (border with Śląskie voivodeship) which are both easily reachable from Krakow by train. The best point to start the VeloDunajec route is Zakopane or Nowy Targ, which can be reached from Krakow by train or bus (bicycle transport is operated e.g. by FlixBus). Riding on the VeloNatura route can start from the train stations in Krynica or Muszyna. The VeloMetropolis route, between the border with Podkarpackie voivodeship and the city of Krakow, runs virtually parallel to the Kraków-Rzeszów railway line. Due to numerous repairs of railway lines, it's good to check on a regular basis (portalpasazera.pl) whether a given trainset is adapted to transport bicycles and whether there is no temporary substitute communication (which may exclude transport of bicycles).

For bicycle routes and trips, the most optimal solution is still road transport. Information about parking lots can be found on pages with descriptions of routes and trips.

5. Where can I find current maps and guides?
Both paper and electronic (on-line) maps are available. Please go to Maps tab.

6. Are the routes available all year round?
Yes, but in principle they aren’t cleared of snow. They were supposed to be used by cross-country skiers in winter, but in recent years the winters have been pretty much snowless, so the routes stay "black" practically all over the year. Currently, only some sections in the Podtatrze region (Route around the Tatras) are sometimes used to set up cross-country skiing tracks (the map can be found at www.biegowki.nowytarg.pl).

7. Who is responsible for the routes? Where can I raise my comments on routes?
There is no single route manager. The VeloMałopolska routes are managed by the Voivodeship Road Administration in Krakow. However – if only you notice any fragment of the infrastructure that can cause danger - send us a notification by e-mail to narowery@umwm.malopolska.pl giving the exact location (a photo with geolocation is enough) and description of the problem.

8. Are there any toilets along the route?
In the warm season (March–November) there are mobile toilets available, among others at Cyclist Service Points (MOR), which are located on main routes every 15–20 km on average. We also recommend all catering facilities located along the routes.

9. Why are some Cyclist Service Points (MOR) not located right on the route and I have to leave the route to reach them?
Some Cyclist Service Points are indeed located at a certain distance from the route (max. 1 km). Such a location is caused either by the fact that the construction of points near the route would be somehow problematic (e.g. no construction possible in the inter-embankment area) or simply by the desire to provide cyclists with access to nearby stores / local centres. 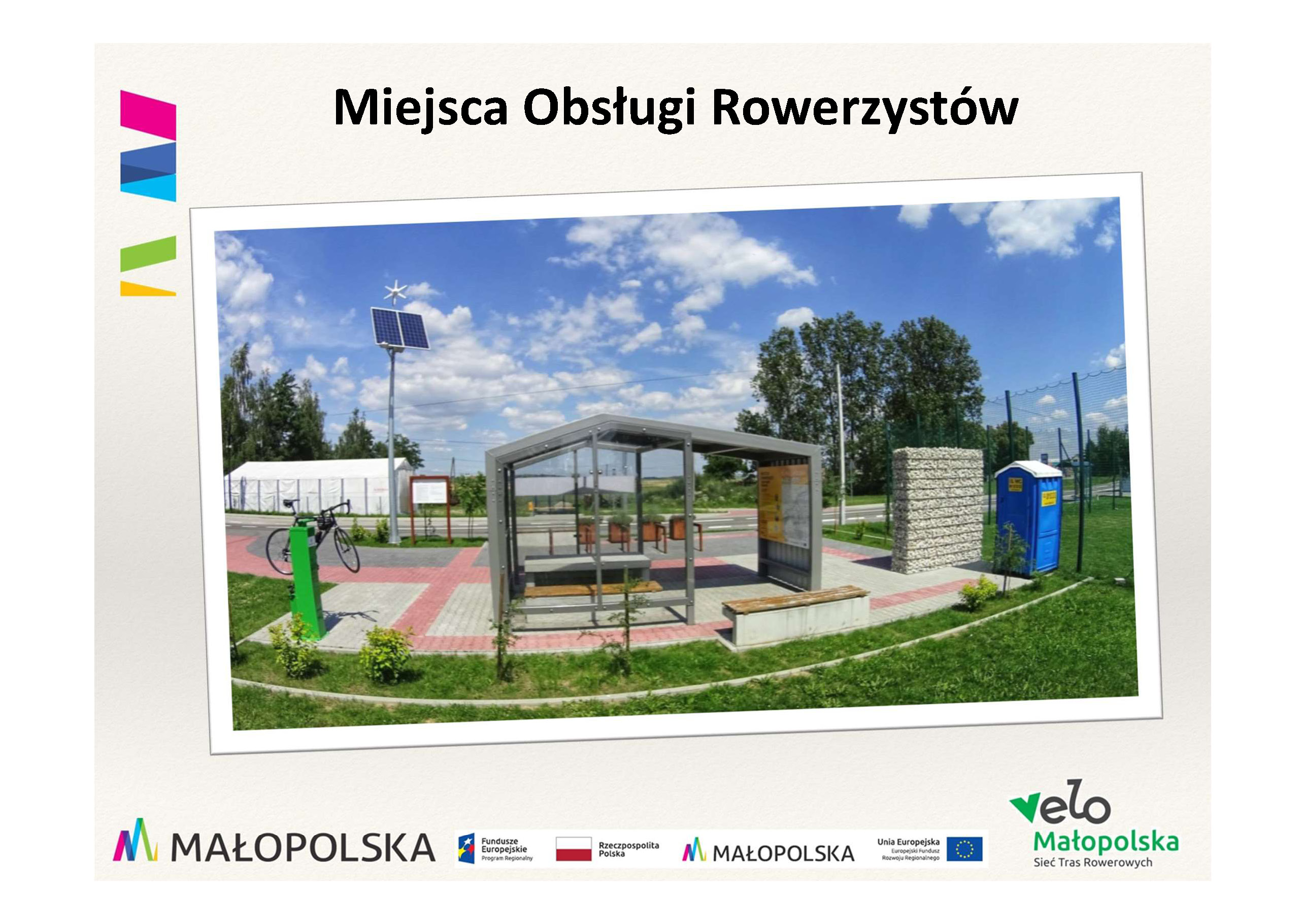 10. Where to look for accommodation, where can I eat or buy something along the route?
We especially recommended places with local delicacies, which can be found in the Regional Inns section, while the information on accommodation can be found in the Accommodation tab. We also offer the use of publicly available databases on the internet (Google Maps, Booking) and locally in towns located on routes.
Soon, the Cyclist-Friendly Places programme will be launched, which will aim to promote business entities open to cycling (e.g. that provide overnight accommodation, basic tools for repairing a bicycle, or a place for storing / loading two-wheelers).

11. What should my bicycle be equipped with, so that I can ride safely?
Briefly - with everything that is required by the Polish road traffic law, i.e.

When riding on the sections running in Slovakia, you must remember about the obligatory bicycle helmet. More details can be found at szlakwokoltatr.eu 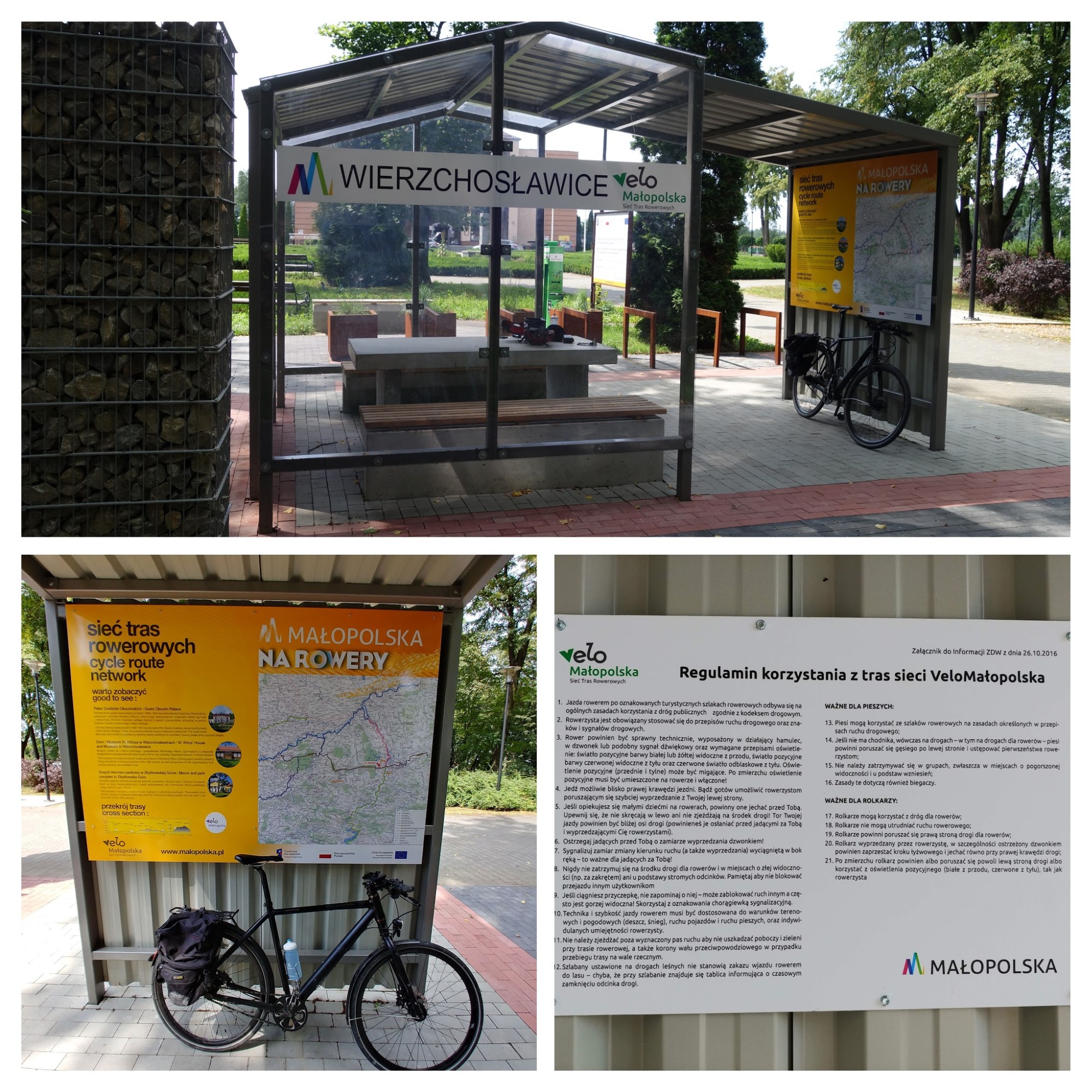